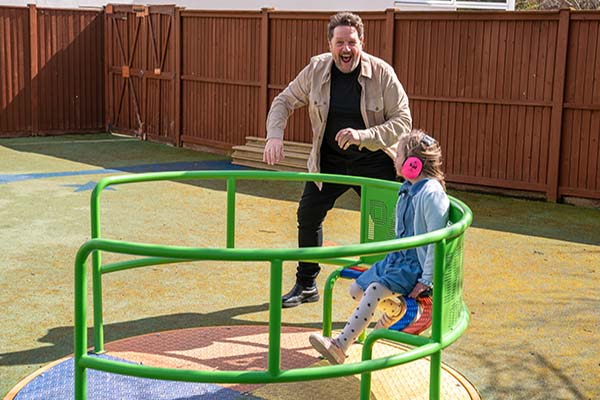 Following the exciting announcement Michael Ball OBE will be performing at the London Palladium in aid of Shooting Star Children’s Hospices this June, the musical theatre legend visited children and families at the hospice for a morning of singing and fun.

Michael, a Patron since 2009, visited the West London hospice; Shooting Star House in Hampton. He spent time talking to children and families supported by Shooting Star Children’s Hospices and joined in with some wonderful Michael-inspired arts and crafts including phantom mask decorating, a ‘hairspray’ station for some fun hair creations and a music therapy singing session.

Adding some extra sparkle to the day was an amazing glitter wall perfect to pose in front of and show off the wonderful new hairstyles created by the children and care team. A huge thank you to Gift Wrapped Events for allowing us to use the wall for free for the day!

Michael was also treated to a special Makaton version of Love Changes Everything performed by some of the Family Support Team. Makaton is a language programme using signs and symbols to help people communicate, which many of the children at Shooting Star Children’s Hospices and their families use.

Since becoming a patron 13 years ago, Michael has brought the world of music and stage to Shooting Star Children’s Hospices with three star-studded concerts, raising money for vital transportation at both hospices to help children and teenagers enjoy days out. He has also appeared on Celebrity Catchphrase winning £6,600 and in 2020 took part in a special virtual fundraiser with fellow singer and the charity’s Vice-President Tony Hadley.

Michael Ball OBE said of the visit, “It’s a total and utter joy to be back at Shooting Star Children’s Hospices after so long, to see the place coming alive again, and to see people thriving in this environment. The love, the positivity, the creativity, is undiminished by what we’ve been through over the last few years. I’ve supported this place for a long time and will continue to do so for many more years – it’s a privilege to be part of this family.”

Peter Hoskins, dad of 15-year-old Michael who is supported by the charity said, “Michael is very into his music, he plays guitar, drums, keyboards, so it was great to chat with Michael Ball, he showed a lot of interest about Michael’s history and I want to thank him for all he’s doing to support Shooting Star Children’s Hospices.”

Karen Sugarman MBE, Executive Vice-President at Shooting Star Children’s Hospices said, “It was such a pleasure to welcome Michael back to the hospice. He has been a truly incredible Patron of Shooting Star Children’s Hospices. We are so honoured to benefit from his fantastic show in June and in such an iconic venue. We are so proud of Michael and would also like to thank his fans, who have also shown so much loyalty of many years.”

There are still a few remaining tickets for Michael Ball’s concert on Saturday 11 June at the London Palladium – find out more and to book click here.