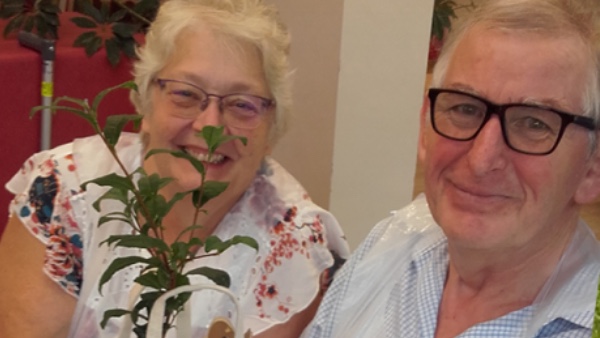 “Alan and I were in the Army”, says Deb. “We met in the Sergeants’ mess and clicked immediately. I left when I was 30, but Alan stayed on. We married and had three children. When he finally left, he wanted to be near his family, so we moved here.”

The couple’s first news of Alan’s illness came after some persistent symptoms led him to see his doctor. He was referred to a neurologist at Frimley Park Hospital, who diagnosed Motor Neurone Disease.

“Alan asked him about a prognosis, and he told us it was 6-18 months. It was a massive shock. Our lives fell apart. I phoned our doctor and she immediately made arrangements for us to see her. She recommended various different things and one of those things was Phyllis Tuckwell Hospice Care.”

“The suggestion filled us with panic and dread, because we thought Phyllis Tuckwell was a place you go to die. So we said ‘no, we can’t do this’. Our doctor asked us to put aside our prejudices and go for it, and said that we would be surprised.”

“At the Hospice we saw Dr Nick, and he was fabulous. He talked to us like normal people who had a problem, but one that wasn’t insurmountable. He reassured us that they would be there with us throughout, and that we wouldn’t be on our own. We started seeing him every couple of months, and he suggested other areas within Phyllis Tuckwell that could offer us more support and care.”

“He arranged for us to have a tour of the Hospice, and that was really mind-opening, because it was light, it was airy, there was laughter; it was everything that we never thought it would be. He took us to the Dove Lounge, where Day Hospice was held, and also suggested that Alan could come to the In-Patient Unit for respite care, if that would help.”

Alan started coming to Day Hospice once a week. “It gave him a new lease of life,” says Deb. “He used to enjoy getting up on a Tuesday. He put his nice clothes on; he wanted to look smart. He was a bit like my old Alan back again.”

Alan and Deb also started coming to our Tai Chi classes. “They were specifically arranged for people with mobility problems,” says Deb. “At the end of the class we were so relaxed; Alan used to say that he was able to forget about everything, to just sit and not worry.”

Alan also started coming to a weekly exercise session at the Hospice, where a small group of patients completed different exercises, such as lifting small hand weights or walking on the treadmill. These exercises were designed to strengthen their muscles, improve their stamina and help them maintain their independence. “When Alan first came, he used to do all of the exercises,” says Deb. “Then as he got worse, the amount started to decrease. But the sessions weren’t just about the exercises, he loved the social aspect too. We were part of a lovely little group and we all got to know each other. It gave you a really warm feeling.”

Alan and Deb also came to our Social & Therapeutic Horticulture (STH) sessions, run by one of our Occupational Therapists, Lisi. These sessions enable patients to take part in gardening and nature-based activity, making a pot of flowers for example, which they can take home or give to a loved one. Research shows that nature and gardening can reduce stress levels and improve wellbeing, and through these sessions patients find a restoration of skills and improved confidence.

“Alan would make me a basket of flowers, a little herb garden or a pot with plants in. It gave him a new lease of life. He would say ‘let’s go to the garden centre, Lisi’s told me now is the right time to get bulbs’. I loved gardening, but as Alan started to get worse I switched off from a lot of things. STH got us back into it. Slowly the garden became a big focal point for us.”

“The sessions were very well structured. We had notes on what we had to do and there were always volunteers there to help. They had everything from gloves to plastic aprons, and everything was in a specially designed trug, so it didn’t matter if you spilt the earth. There was never any worry about how long things were taking, you did it in your own time.”

“The last thing we made was a Christmas wreath,” says Deb. “We did ours flat, so we could use it as a table decoration. On Christmas Day we had the family round and I had the table set for dinner. Everybody was ready, and Alan suddenly started typing on his computer speaking machine, and all he typed was ‘wreath’ – and he kept pressing this again and again. He wanted it on the table because it was something he’d made for us as a family. I’ve still got it now. I’ve also got a couple of pots on my windowsill that he planted for me, and in the garden two or three planters that he made. I will treasure those plants and keep them going for as long as I can.”

As well as physical and emotional support, Phyllis Tuckwell also helped Alan and Deb with practical matters. “I was having problems with funding for Alan’s carers,” explains Deb, “and one of the Social Workers got it fixed. It was fantastic. As Alan’s illness increased she would phone me up and say ‘I think you need more help’ and the next thing I know she’s been in touch with the care agency and the funding people, and suddenly we went from a carer for an hour and a half a day, to four hours a day. She also arranged for a carer to stay with Alan one afternoon a week, so I could have some time to myself, and that afternoon off was so precious to me. It gave me a chance to re-charge my batteries.”

After Alan and Deb had been coming to the Hospice for some time, one of our Doctors, Jacqui, suggested that Alan might like a week of respite care on the In-Patient Unit (IPU).

“We were reluctant, but we agreed to visit the IPU and that changed our minds. We were shown one particular room that was specifically designed for people with Motor Neurone Disease and other similar illnesses. Everything in the room was connected to a computer, so by just touching a button Alan could open the curtains, raise and lower his bed, and turn the television and lights on. It gave him control, which was important. It gave him his independence.”

Deb found it strange being at home without Alan, but got used to it over the week. “The nurses had said the stay wasn’t just for Alan, and after a few days I could understand that,” she explains. “I managed to sleep properly, and I got out a couple times without worrying if he was ok. We both benefitted from the break. I came up to see him almost every day, and every time I turned up there was a cup of tea for me within seconds. Our daughter came up with our grandson, and Alan got into his wheelchair and we spent a lovely few hours sitting in the gardens. It gave us a chance to sit and talk in calm surroundings.”

“We were very comfortable at the Hospice; for us it was a safe haven. Although we were adamant that Alan should spend as much time as possible at home, he said that if his illness got the point where we couldn’t manage, he felt comfortable if we had to come to the IPU.”

Towards Christmas Alan began to go downhill very fast, and they spent Christmas night and Boxing Day in hospital. “We went home the next day, and managed to cope with much increased carer assistance – again organised with the help of Phyllis Tuckwell. Alan was deteriorating rapidly and that’s when we had a visit from Sue, one of Phyllis Tuckwell’s Physiotherapists.”

Sue arranged for Alan to come and stay at the Hospice. “Alan nodded his head and gave me a thumbs up, because by this point he couldn’t talk anymore. Well, I think the best way to explain it is to say that we moved in! We knew that Alan wasn’t coming out, that much was pretty obvious. And he knew it too. We talked to the nurses, and they helped me to accept that as much I wanted to get him back home, it just wasn’t practical. They put up a bed for me in his room, so I could stay with him day and night. He was in a lot of pain, and they helped to make him comfortable. Nothing was done without telling us what the situation was and even then giving us choices. They gave us a shoulder to cry on, and I needed that. You can only be strong for so long. We had all the family over at different stages, and we all knew it was to say our goodbyes.”

“One particular night, when Alan was very ill, we had a cuddle and I just said ‘go, if you want,’ because I couldn’t see him suffering anymore. He insisted that I went back to bed, so I did, and I fell asleep. I woke up suddenly at about 6 o’clock the next morning, and I knew something was wrong because all his breathing machines had changed note, the noise was different. I knew that he’d gone. I think he’d waited until I’d gone to sleep.”

“I went out to one of the nurses and she came in straight away. I phoned the children and they all came over, and the nurses left us to it. That was nice, to be with him until we were ready to leave. It was very peaceful.”

Before Deb and her family left the Hospice, one of the nurses gave them a pack containing information about what they would need to do next. “It contained a lot of things that I wouldn’t have thought about, which was a real help.”

Six weeks after Alan’s funeral, Deb and her children were contacted by Phyllis Tuckwell to ask if they wanted counselling. “I had already been seeing a counsellor,” says Deb, “and our children decided they would like to see someone too. Counselling gave me the permission to be angry – with Alan, with the world, to break down and cry without feeling that I was going to upset anybody. It gave me somewhere to let go and be myself. I still come to the Hospice too. I feel comfortable here, it feels like home to me.