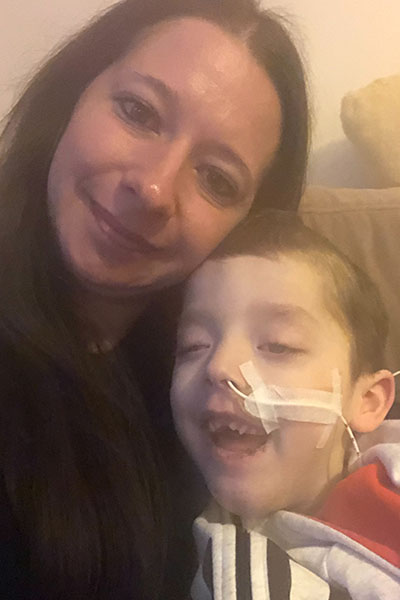 Gibson’s mum Debbie has chosen to be a an amazing astronaut and raise funds for Shooting Star Space Race.

Here is Gibson’s story; It was during late pregnancy when parents Debbie and James were told there had been abnormalities detected in their baby boy’s brain. “Prognosis wasn’t good… we were told he would only be with us for a very short time,” explains mum Debbie.
“It was at this point the hospital put us in contact with Shooting Star Children’s Hospices and arranged for us to have a visit … upon arrival it became clear to us it was far from what we had imagined. It was incredibly welcoming and friendly – a positive place to be. So, we decided that after the birth we would transfer to the hospice to receive their support and guidance in what we knew would be a difficult time. 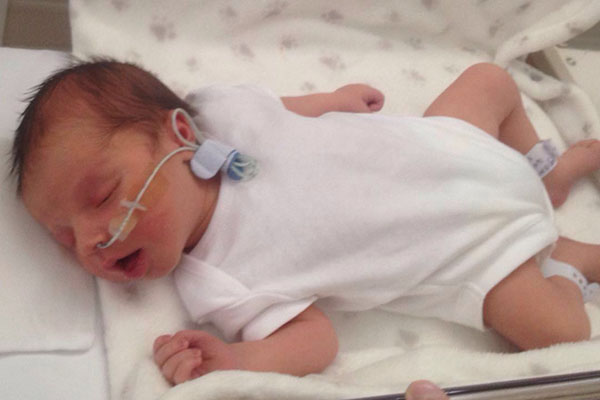 “Gibson arrived four days after his due date kicking and screaming, making it very apparent he was a little fighter! We remained together at the hospital, then after four days, we travelled to the hospice as a family. During this time the hospice were in constant contact with the hospital to ensure we were ready for our arrival,” continues Debbie. “We stayed at the hospice for three weeks. The staff were such a huge support, they helped us capture so many happy memories and we would have been lost without their medical knowledge. They offered so much emotional support and were completely understanding during what was a very difficult time, not only for us as parents, but also for our families and friends.”
During the family’s stay it became clear that Gibson had very different plans to what had been originally expected, and the family were told they could take him home. “Whilst delighted, this was also a very daunting prospect as his care needs are far from typical. The staff at the hospice spent so much time with us teaching us how to carry out all the different aspects of Gibson’s care ensuring we felt comfortable and confident to return home with relevant care plans in place,” says Debbie.
“The support didn’t stop there, we received respite stays throughout the year and when he was at the hospice Gibson enjoyed all that was offer, including the amazing hydrotherapy pool, the sensory room, complimentary therapies, and special events the hospice arranged.
“Shooting Star Children’s Hospices work closely with Paediatric palliative care clinics to ensure the very best care can be given to the children they support. Gibson’s condition, Joubert syndrome, is a very rare genetic condition which many doctors and hospitals haven’t come across so there is very little knowledge on how to deal with it. The hospice and consultants are much more familiar with such complex conditions and become a ‘go to’ due to their experience in such cases, not only for us as parents, but offering support to other medical professionals involved in Gibson’s care.
Debbie says, “The knowledge, support, level of care, time, compassion and experience the staff at the hospice provide was invaluable to our family and not something offered by other services. Whilst, of course due to the nature of hospices, there are families who are going through very sad times, the hospice is a very happy, accepting, positive place – a place full of friendly faces and happy children making memories to last a lifetime.”
It was just after Gibson’s second birthday when he was discharged from palliative care. “This was of course amazing news, however it meant we were to leave the service of Shooting Star Children’s Hospices. It was very difficult to say goodbye to such an incredible service and remarkable team of people who had supported us – we will forever have fond memories of our time spent at the hospice. I decided to take on the Space Race to help raise funds for them, as the service provided by Shooting Star Children’s Hospices is irreplaceable to those receiving their support. As Gibson is still currently shielding, he hasn’t been able to come out with me for all my Space Race walks, but has thoroughly enjoyed those he’s been on so far and whatever the weather has in store for us for the rest of March, it won’t stop any of the fundraising efforts! 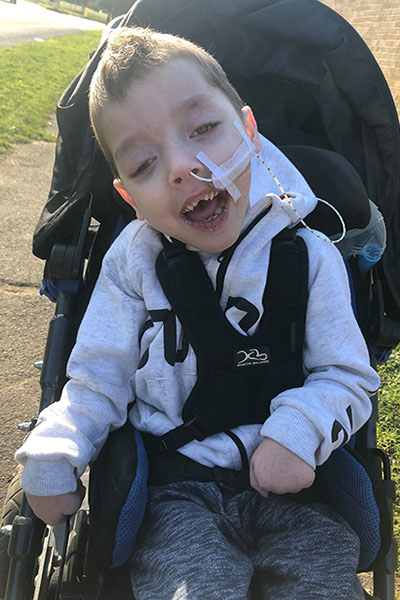