“I dedicate my MBE to the team at Shooting Star” 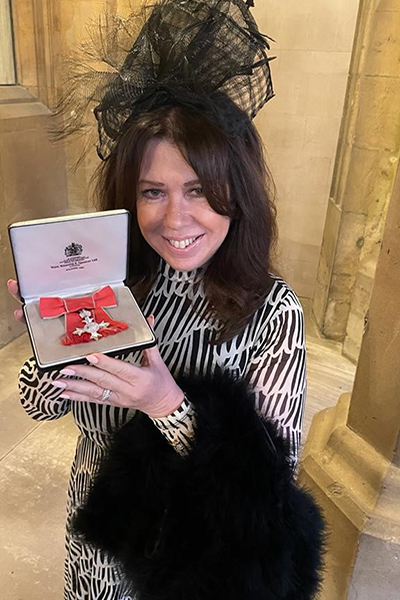 A huge congratulations to Shooting Star Children’s Hospices Executive Vice-President, Karen Sugarman, who on Wednesday 17 November received her MBE from HRH The Princess Royal at a ceremony in Windsor Castle for her services to life-limited children and young people.

Karen was awarded an MBE in the 2020 Queen’s Birthday Honours, but due to the unprecedented times with the Covid pandemic, her investiture didn’t take place until this year. 2021 marks a very special year for Karen, as her 35th year working in the charity sector, with 18 years of that time working for Shooting Star Children’s Hospices.

On the special day Karen wore her mum’s earrings, a hat given to her from Lady Forsyth and a beautiful brooch given to her by Vice-President Dame Joan Collins.

Following a career in music and TV, Karen joined Cancer Research UK as a volunteer before spending 15 years working with children and young people living with cancer and leukaemia. Having been aware of the vital importance of the hospice movement due to personal circumstances, it was in 2003 that Karen fulfilled her ambition to work in children’s palliative care when she joined Shooting Star Children’s Hospices. Karen also works as a bereavement support volunteer for adult palliative care services.

Karen Sugarman MBE said, “Sadly 35 years ago, my family needed the lifeline of hospice care, and I knew from that moment that life would change forever. It has been an honour to spend the last 35 years meeting the most incredibly brave children, young people and families. It was a privilege to receive an MBE, but the real honour is working with my colleagues at Shooting Star Children’s Hospices whom I have the greatest respect and admiration.”

Many of Karen’s close friends joined the charity to ensure that together that could help make a significant difference and highlight the plight of children’s palliative care. They include fellow Vice-President’s Dame Joan Collins, Simon Cowell and Tony Hadley MBE.

Karen was also responsible for creating many fundraising opportunities, including the star-studded Shooting Star Ball, now in its 17th year. Her first event for the charity was a special Afternoon Tea for the children and families hosted by Dame Joan Collins, with Sir Bruce Forsyth as MC and Auctioneer. Karen secured a Who Wants to Be a Millionaire special with Patrons Jackie and Laurence Llewelyn-Bowen winning £500,000 for the charity; the most money ever won in the history of the celebrity version of the show.

Karen continues, “Although I am proud of some very significant fundraising achievements, the best part of my job is helping to make some special memories and wishes for the children and families. I have been so privileged seeing at first hand the difference these make, and I am forever in awe of every single colleague in the charity, and I dedicate my MBE to the team at Shooting Star Children’s Hospices. I hope I can spend the next 35 years continuing to make a difference to families who need our hospice care service now and long into the future.”