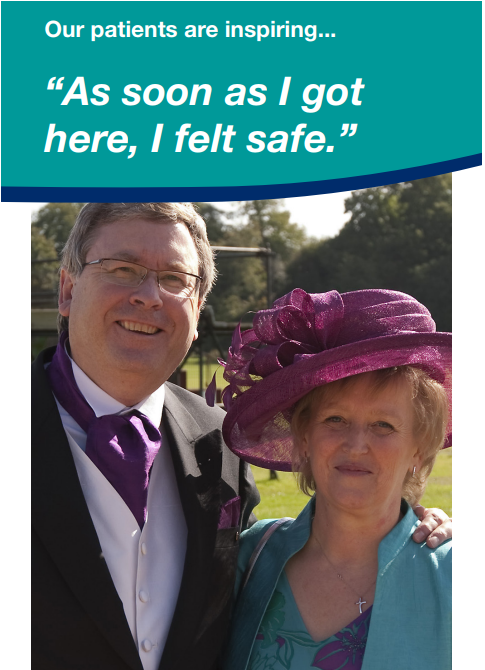 “As soon as I got here, I felt safe,” says Julie, who is staying on the In-Patient Unit at Phyllis Tuckwell Hospice. “All the stress is taken away; you can just let go and let them look after you.”

Julie has been living with cancer since 2011, when she found a swelling under her left arm. “It moved into my breast,” she explains, “where it became more of a lump than a swelling. My GP immediately knew something was wrong.” Julie was fast-tracked to hospital, where a scan revealed a breast cancer which had already spread into her lymph nodes.

“Mum had chemotherapy and a lumpectomy, followed by radiotherapy,” says her daughter Claire. “We thought she was in remission, but it came back again really quickly, which was a shock for us all.”

In 2014, three years after her initial diagnosis, doctors told Julie that the cancer had progressed to her bones. “It hit her spine badly,” says Claire, “and caused a spinal fracture. They operated, and thankfully it went well and Mum was able to walk again afterwards.”

To help Julie recover from the operation and cope with the progression of the cancer into her bones, her doctor referred her to Phyllis Tuckwell Hospice Care (PTHC), and she and her husband Andrew were visited at home by a PTHC physiotherapist.

“She told us about the Beacon Centre,” remembers Julie, “and she said I could go there to meet other people who were in the same situation as I was. There was also an exercise class which I could go to, to help me to maintain my muscle strength and general fitness, keeping me active and helping me to retain my independence. I told her I was interested, and soon afterwards I started going there once a week. The classes were great fun, good for meeting other patients as well as for exercising, and in a very handy location too, as we live in Godalming.”

As well as attending exercise classes, Julie also saw Phyllis Tuckwell nurses at the Beacon Centre, and went along to the weekly art therapy and poetry classes which are held there. These creative therapy classes are offered by Phyllis Tuckwell as a way for patients to express their thoughts and feelings, particularly around their illnesses. They can provide an invaluable distraction from the stress and complexity of a terminal illness, and can help patients work through their emotions to find a sense of peace and tranquillity. “It’s a lovely centre,” smiles Julie. “The poetry class in particular was wonderful – I really, really enjoyed it. They do hand massage there too, and mix creams for you.”

Julie attended classes and clinics at the Beacon Centre for around a year, and drew comfort from the friends she made there. “Their support helped me feel that I wasn’t alone,” she says. “We were all going through similar situations and journeys, and we shared the ups and downs of that, helping each other through the difficult times and sharing experiences which we knew the others would all understand.”

In the spring of 2016, Julie came to the end of her latest course of chemotherapy. The medication had worked on some areas of the cancer, but not on her spine. Feeling that she needed a break from treatment for a few months, her doctors signed her off for the summer, and she and her family began to look forward to some time together without any hospital trips. However, as Julie’s pain increased, doctors decided to cut short her break and booked her in for more radiotherapy. She didn’t have the chance to start it though as, a few days later when in her garden at home, her legs gave way and she collapsed. Very weak and in a great deal of pain, she was admitted to hospital, where doctors worked hard to bring her symptoms under control. Concerned that the cancer was pressing on her legs, doctors referred Julie for physiotherapy, but during one of the sessions her legs buckled. Her neurologist sent her for more scans, which revealed that the cancer had progressed into her central nervous system.

Julie spent three weeks in hospital, during which time she was referred back to Phyllis Tuckwell, and was moved to the Hospice In-Patient Unit (IPU) as soon as a bed became available.

“Mum was extremely anxious about coming” says Claire. “She had suffered so much and felt so vulnerable. But when she arrived, the nurses reassured her. They treated her like a person, not just a patient, taking time to get to know her needs and how to make her comfortable. They helped her to keep her dignity.”

“As soon as I got here I felt safe,” Julie agrees. “My first day here was at the start of the summer, and lots of family and friends came to see me. We enjoyed the beautiful garden, which I found so relaxing. It made a big difference to us.” 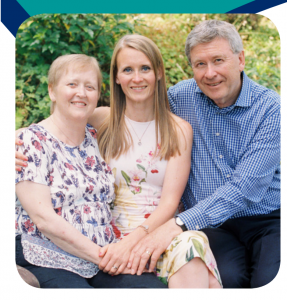 Unlike a hospital, the Hospice does not have any visiting restrictions, which means that family and friends are able to visit their loved ones on the In-Patient Unit at any time of day or night. Andrew and Cla

ire found that this made a huge difference to them, enabling them to be with Julie as much as they could and for as long as she needed them.

When she arrived at the Hospice Julie was still able to stand, with the help of a walking frame and two nurses. However, as the cancer continued to affect her mobility, she lost the use of her legs and now has to use a hoist to be moved. “I can feel my legs, but I can’t move them at all,” she says.

As well as the physical adjustment needed to cope with this change, Julie has also had to adapt mentally, something which Phyllis Tuckwell staff have helped her with. “Symptom and pain management were key,” says Claire, “but the reassurance and kindness of staff has been amazing too.”

Physiotherapists visited her daily on the IPU, first helping her to stretch her legs and then supporting her as she adjusted mentally to not being able to use them anymore. She also received help from Phyllis Tuckwell’s Occupational Therapists, who gave advice on wheelchairs and other aids which might help her and, when the cancer progressed further and she lost the use of her left eye, helped her to cope with that too. 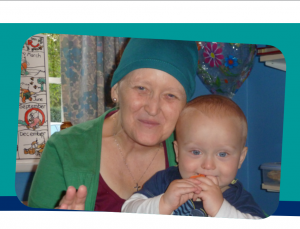 Complementary therapists have also visited Julie, offering massages which have helped with her pain, and making a pain relief meditation CD for her, which she has found very beneficial. “They came this morning,” she smiles, holding out her hands. “They did my nails and we had a nice little chat.”

Julie’s first stay on the IPU lasted for three weeks, after which she moved to a care home. She was visited there by PTHC staff who continued to assess her needs and, as these progressed, brought her back to the Hospice for another stay on the IPU.

“We feel here that, as a family, we are able to have quality time with Mum,” says Claire. “It could have been a stressful time, but because we trust everyone here we don’t have to worry about everyday care – we can let the staff here do that while we just enjoy being with Mum.”

“I get comfort from the Hospice chapel and chaplains,” says Julie. “And the hand holding is amazing; the staff will sit and hold my hand in theirs. If anyone has just been referred to Phyllis Tuckwell, I would tell them, you will feel very safe and nurtured here. They make you feel special; they do anything they can to make you feel better. As a family we cannot thank the doctors, nurses, staff and volunteers enough for their amazing kindness and care.”