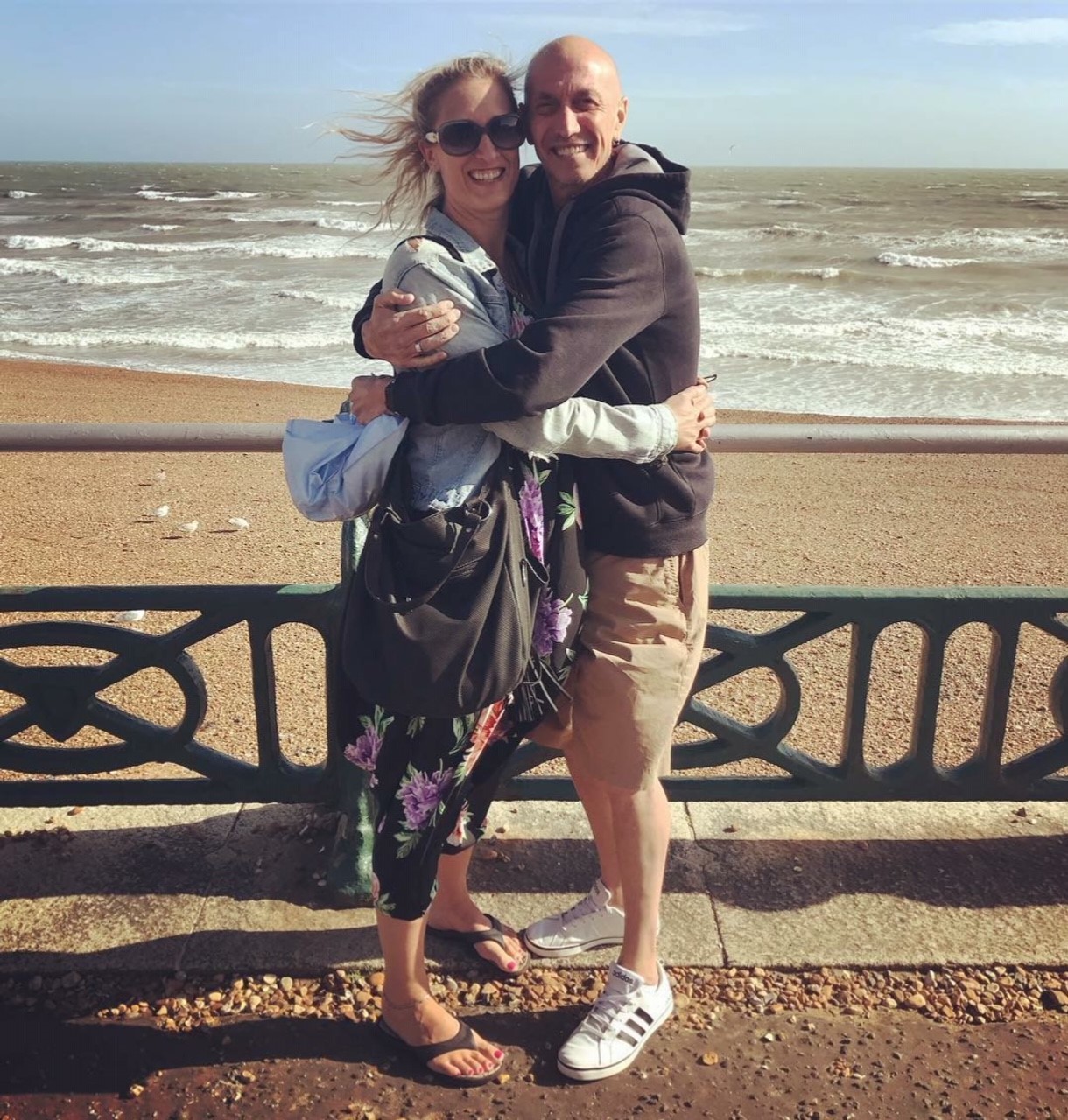 When Rick was diagnosed with stomach cancer, his wife Jo was caring for him full time. He was experiencing severe pain and nausea which meant that he was repeatedly admitted to hospital, and sickness which left him dehydrated. One of the Clinical Nurse Specialists (CNSs) at the hospital spoke to Rick and his family about referring them to Phyllis Tuckwell, and arranged for them to see Teresa, a CNS at Phyllis Tuckwell.

Teresa visited Rick and his family at home, and made an appointment for him to see Dr Beata, one of Phyllis Tuckwell’s Specialist Palliative Care Consultants. Dr Beata works in the community as part of Phyllis Tuckwell’s Care at Home team. She and the team visit patients in their own homes, so that they don’t have to travel to hospital or the Hospice to receive medical advice and treatment. This was very important to Rick, as at that time Jo was frequently driving him to and from hospital, as well as caring for him at home and looking after their two children, 20 year old Jade and 15 year old Jack. The Care at Home team also provides nursing care, physiotherapy and occupational therapy support, complementary therapy treatments, counselling, emotional and chaplaincy support, and help with practical matters such as applying for benefits or arranging carer support. Now under the care of Phyllis Tuckwell, Teresa and Dr Beata began to visit Rick regularly at home.

“That was the turn-around, when we got introduced and the doctors and nurses started coming to see me at home,” says Rick. “It was brilliant. I had thought, this is it, I’m in hospital. But no, I’ve been able to go back home. They’ve been marvellous.”

Teresa also referred Rick to Phyllis Tuckwell’s Complementary Therapists, for massages and other treatments to ease his pain and nausea, and also to their Patient & Family Support team, whose Welfare Officers helped both him and Jo apply for sickness and carer benefits.

Although Rick now no longer needed to travel to and from hospital regularly, he was still very ill, and had some very bad days.

“Last week, when Teresa came to see me, I was having a really low day,” he says. “I couldn’t even get out of bed. I was the most emotional I’ve ever been in my life. Teresa asked if I’d like to go and stay at the Hospice and I said yes, but the next day I picked up and I was feeling a lot better. Then I got the phone call though, saying there’s an ambulance coming to get you and you can stay for a week in the Hospice, but because I felt a lot better I said no, actually I’m not going. But then as I said it I heard my daughter call down from her bedroom, and my son and my wife all say ‘yes, you are!’ So that was it, I had my marching orders! I had no idea what to expect when I got here, no idea at all. I was comparing it to a hospital, but it’s nothing like that. When the nurses and doctors come to see you, you have about an hour’s one-to-one chat with them. They’ve got so much time for you – they really get to know you and find out about you. And when you have a bad day, they get straight on top of it. They sort you out straight away. You’re their priority, you’re not in a line waiting for them to get to you. When we got the phone call that the ambulance was on the way, I really didn’t want to come. But I’m so happy I did, I really am. They’ve been great.”

Melissa, Rick’s sister, nods. “Rick’s perked up loads since he’s been in here. He feels safe. If he needs somebody, he can ring the bell and they’re literally through the door straight away.”

“They come through the door before I need them, sometimes!” Rick smiles. “I do feel safe though, and the staff are responsible for that. At home you can get a bit scared.

My wife can administer the drugs, but it’s unfair on her because she’s not a nurse or a doctor, and sometimes I need more.”

“The one thing that Rick was assured when he was diagnosed was that they’d keep his pain under control,” says Melissa, “and they’ve really done that.”

“That was my biggest worry,” agrees Rick. “I’m not scared of going, but I don’t want it to be a painful finish, I don’t want to be going suffering. I’d rather go comfortably, with my family around me – and I can see that here. I do feel safe, I feel comfortable. You’re looked after, you’re cared for. When they said you’re going to the Hospice for a week, my stomach turned and I thought really? But that week’s nearly up and I don’t want to leave.” He gestures around the room. “Look at what I’ve got, I mean hotel rooms aren’t as glamorous are they?”

“You won’t get rid of him!” laughs Melissa. “It really has been great though. One of the ladies was here yesterday massaging Rick’s feet. At the weekend we sat in the lounge and watched TV together, like we would round Rick’s house, and that was really nice.”

“I’ve never had a massage before,” says Rick, “and it’s heaven, it really is. I can’t wait for the lady to come today so I can have another one! There’s no restriction on visiting times either,” he continues. “People can come and stay whenever they want. They’ve even told me they’ll make beds up and let family come over. My son Jack has just started his mock exams this week. He’s a very high achiever and he’s worked so hard through his school career. It’s a critical time for him and I don’t want what I’m going through to affect his results. Phyllis Tuckwell have been kind enough to say they’ll make a bed up here, and he can stay and revise overnight, they’ll give him dinner and some breakfast, and he can make his way to school the next day. So he’s been making the most of that.”

“It’s lifted a weight off Jo’s shoulders as well,” Melissa says. “It’s given her time to be Ricks’ wife, and to sit and massage his feet, and tickle his back, and have a cuddle, and be a mum and go home and walk the dog – all the things she’s not been able to do as much because she’s been literally sat there watching Rick. She can read him like a book. He only has to move in a certain way and she says ‘do you want me to get such and such?’ She knows him inside out.”

“We’ve been together 28 years,” says Rick. “We met at school. A lot of people haven’t got 28 years of history to talk about and to hold on to. I take all the positives and make as much in my head positive as possible. Jo’s absolutely fantastic. She goes above and beyond every day.”

“They’ve said that Jo and I can get counselling here if we want it, and the kids can too,” says Melissa.

“I was seeing a counsellor,” says Rick, “but I’ve decided I would be better suited to a group environment with other people who have cancer, so I can get some understanding, because before I got it I didn’t know a lot about it. But I’ve opted to see Teresa, because there’s nothing she doesn’t know about it. I can ask her anything, write down my questions for when I next see her and she answers them all, and so for me that is a form of therapy. I’m getting all the help I need, definitely, and it’s thanks to people I didn’t even know existed.”

“I didn’t even know this place was here,” agrees Melissa. “I’d heard of Phyllis Tuckwell and I knew the Hospice was in Farnham, but I didn’t know where or anything about it really.”

“One of my good friends, his stepdad was in here,” says Rick, “so when he found out I was coming in he said ‘you’re in good hands now’ – and he’s right. The nurses are fantastic; and the housekeeper manages to do the room when I’m asleep, I don’t even know he’s been in, I just wake up and everything’s clean! Everybody’s just so good, so kind, even down to the tea lady!”

Melissa nods. “One of the guys who helps with the teas, he came in the other night when we were sat here and gave Jo a cup of tea – he held it out to her with both hands and looked her in the eye and just smiled at her, and I nearly jumped up and hugged him – it literally made me cry. It’s the care they show, all of them.” 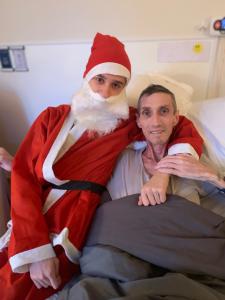 Rick died at the Hospice on 22nd December, just a few days before Christmas. The staff there did everything they could to make it a special time for him, his wife Jo and their children Jade and Jack. Rick was given a family room which was large enough to accommodate a spare bed for Jo and a sofabed for the children, so they could all stay over as often as they liked. Rick’s sisters and parents often stayed over too, in the Hospice’s relatives’ room, so that the whole family could spend as much time together as possible during Rick’s last days. 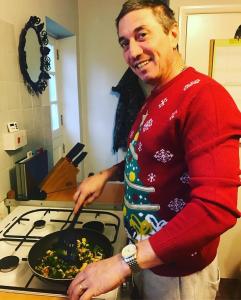 The staff at Phyllis Tuckwell believe that it’s important for families who are living with an advanced or terminal illness to enjoy special time together at Christmas, and do everything they can to make this possible. Their care also continues long after the presents have been opened and the tinsel taken down. They are there for their patients and families 24 hours a day, 365 days a year, and their support continues into bereavement too.