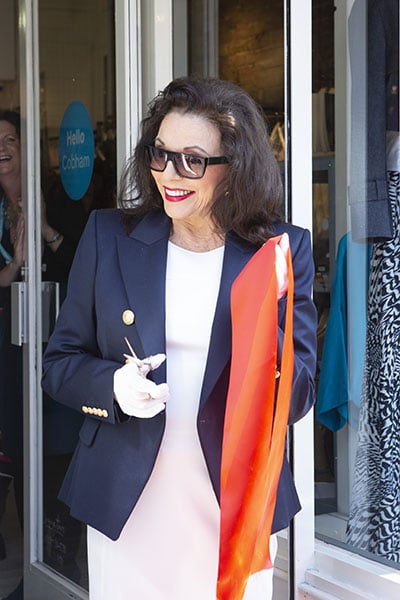 Dame Joan Collins officially opened Shooting Star Children’s Hospices newest shop, located on Cobham High Street. Joined by staff, volunteers and supporters of the charity, she showed them first hand some of the beautiful items she had kindly donated – from designer hats to shoes, dresses and tops.

Dame Joan has donated nearly 300 exclusive items from her own collection allowing shoppers in and around Cobham a chance to own a unique piece of history, whilst supporting their local children’s hospice charity. Items available include a Mont Blanc zebra handbag, a stunning Jackie Palmer animal print dress and even some Donald Pliner shoes signed by Dame Joan.

Karen Sugarman, Executive Vice President at Shooting Star Children’s Hospices said; “It’s an honour to have Dame Joan open our new Cobham shop. It’s exciting for Cobham to have such an iconic global star visiting the town. Dame Joan has been a truly fantastic support to our work, embracing the families we care for, whilst helping on so many levels with our critical fundraising. Dame Joan has been a wonderful friend and support for nearly 30 years in my work and her compassion and care is incredible.”

Nigel Harding, Chief Executive of Shooting Star Children’s Hospices said; “We are truly honoured that Dame Joan took time out of her busy schedule to officially open our newest shop and, what’s more, donate some beautiful items for us to sell. Shooting Star Children’s Hospices receives very little financial support from the government so we rely heavily on fundraising to continue to provide a vital lifeline for families across Surrey and London – and our shops play an important role in helping us fund this service. Our new shop in Cobham will be a significant source of income for the charity and will mean that families living in and around the area, and beyond, get the support they need.”

A stalwart supporter of Shooting Star Children’s Hospices, Dame Joan Collins’ visit to the Cobham shop is just the latest in a number of generous activities she has undertaken as Vice President of the charity. Alongside regularly donating items from her personal wardrobe to the charity’s retail shops, she has treated supported families to exclusive afternoon tea’s and special breakfasts. She officially opened the Fulham and Weybridge shops and has appeared on Celebrity Deal or No Deal and Celebrity Who Wants to be a Millionaire to raise vital funds for the charity. She received her Damehood in 2015 for years of charity work.