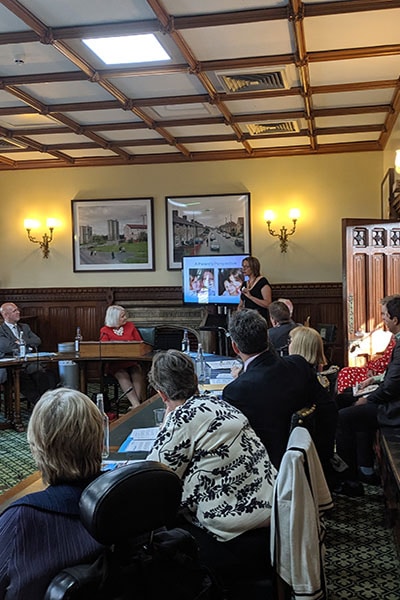 A special briefing held this month at the House of Commons, heard how a lack of government funding is forcing us to cut vital respite care to half of the families currently supported by Shooting Star Children’s Hospices.

The briefing was led by MP Siobhan McDonagh, who pledged to fight for funding for Shooting Star Children’s Hospices, her local children’s hospice charity, after hearing about the changes.

Siobhan McDonagh MP said, “I received a letter from Chief Executive Nigel Harding saying the hospice was being forced to halve the number of children to whom they could offer overnight respite care because a lack of Government funding. I had to do something.”

The Labour MP for Mitcham and Morden hosted the House of Commons briefing for MPs whose constituencies are covered by Shooting Star Children’s Hospices. The meeting was also attended by Sir Paul Beresford, MP for Mole Valley, Anne Milton, MP for Guildford, Baroness Sal Brinton, staff and trustees from Shooting Star Children’s Hospices, families who have used our palliative care services and healthcare professionals who often refer children to our service.

Nigel Harding, Chief Executive of Shooting Star Children’s Hospices told the briefing, “Our services are unique, we are very good a looking after children with life-limiting conditions and those in need of end-of-life care. We offer them a chance to die with dignity. We also care for their families in their moment of greatest need. These services are not offered by the NHS – but we are having to make difficult decisions.”

“When a child leaves an NHS hospital 100% of their care is paid for by NHS England, something happens in that hospital ride to our hospices because when they arrive at our door only 6.5% of their care is covered by the government. The rest is funded by the generosity of the public – a foreign concept when you consider the care and support we provide is the same standard as that of the NHS. Both our hospices are rated outstanding by the Care Quality Commission putting us in the top 3% of health and social care services in England.

“Our nurses and carers effectively reduce the demand on inpatient paediatric beds. That alone should convince funders that children’s hospices are crying out for fairer funding.”

Shooting Star Children’s Hospices are facing a funding gap due to increasing costs, static Government funding and a sharp rise in the number of children requiring palliative care services; we have seen demand for services continue to grow over the last five years with referrals increasing by 38% in the last year alone.

NHS England announced this week it intends to increase funding for children’s hospices to £25 million a year by 2023/24 as part of the NHS long term plan.

Nigel continued, “Children’s hospices were promised this in December last year, we were then told that money was for children’s palliative care across the NHS so forgive me if I am sceptical. We can’t survive on uncertainty.”

Dr Richard Chavasse, Consultant in Paediatric Respiratory Medicine at St George’s Hospital who also attended the meeting said, “We are seeing an explosion in the number of children who need these services. The NHS is under huge pressure. The support and care children receive from Shooting Star Children’s Hospices is vitally needed.”

Siobhan McDonagh and Shooting Star Children’s Hospices urged attendees to recognise the contribution children’s hospices make in alleviating pressures on the NHS and to write to Clinical Commissioning Groups (CCGs) asking them to commit to a regular funding stream.