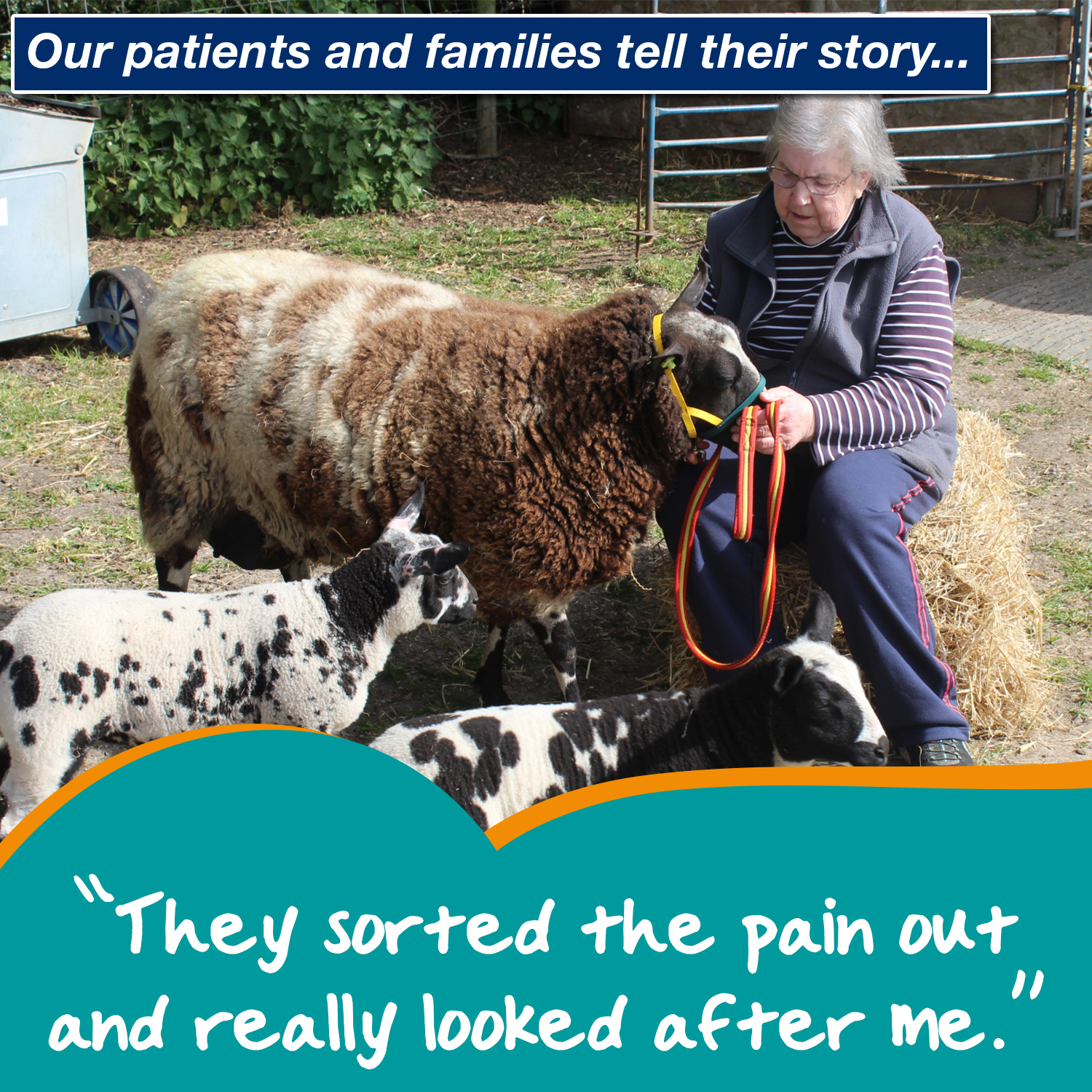 Sue, a retired saddler, has been keeping sheep for over 35 years. “I used to work at the local vets, in the large animal section,” she says. “When I left I really missed the animals, so I bought a few lambs and it went from there. My dog, Spitt, is a collie rescue. She and I take the sheep to shows. We stay at each for a few days; it’s like a little holiday. I also make the harnesses that my sheep wear. They don’t dig in like the rope ones do. For the shows, I’ve made black harnesses with brass or silver buckles on either side of the muzzle, which look really smart and catch your eye – and the eye of the judges!”

Sue was referred to Phyllis Tuckwell in November 2020, by one of the Nurses who was caring for her at Frimley Park Hospital. “I have bone cancer,” says Sue, “and it was spreading everywhere. The pain was unbearable. My Breast Care Nurse suggested Phyllis Tuckwell, to see if they could control my pain.”

Sue was admitted to the In-Patient Unit at our Hospice in Farnham.

“It all happened in about three days,” she says. “They said can you come in now? – but I told them I had to sort out the animals first!” Sue stayed at the Hospice for just under three weeks, while doctors there brought her pain under control.

“It was glorious in there,” she says. “I couldn’t fault them at all. They sorted the pain out and really looked after me. The Housekeeping staff would bring hot drinks, meals, crumpets, I didn’t want for anything! I have a walk-in shower at home, but they’ve got a big bath there, which was fantastic! They would run it for me and I’d have a good soak. They all wore PPE because of Covid, but it didn’t make any difference at all, the care they gave was still amazing. It felt reassuring being there. It’s definitely where I want to go when the end comes.”

After her pain was brought under control, Sue was discharged from the Hospice and went home. “Since I’ve been discharged, they’ve phoned me about once a month to see how I’m doing, and the Community Nurses come out to visit me. The pain is much better. I’m pretty much able to lead a normal life again now the pain has been sorted. I still need to make sure I don’t overdo things though. I’m very independent. I’ve been up the field already this morning and mucked out four sheep. The lambs have all been born now, and when I let them out they run out into the field and jump about. A friend of mine delivered them for me; I can’t do it myself anymore. Before they were born I was going up to check on the ewes four times a day. Going up there to feed and look after the sheep is what keeps me going, really.”