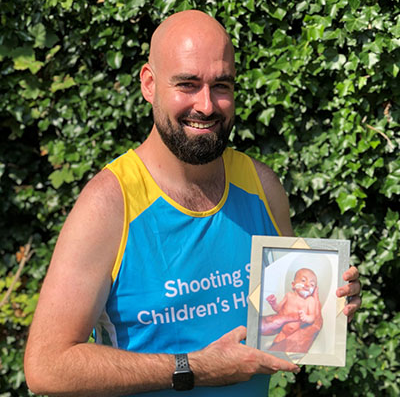 Running a marathon is as much of a challenge mentally as it is physically, and for the amazing team of runners set to complete this year’s London Marathon in aid of Shooting Star Children’s Hospices, the build-up has been all the more difficult due to the pressures and changes the pandemic has brought.

The team of 63 runners are excited to finally be able to come together to take on the 26.2 miles to raise money for the local children’s hospice charity. The money raised by marathon runners is vitally important to ensure we can continue to provide our much-needed care services.

With only a few weeks to the big day, some runners tell of their training, the benefits of running and the importance of being part of Team Shooting Star.

Arthur is running for us in memory of his son, Ted, who was supported by them. “I wanted to do the London Marathon because it’s such a great day to be a part of and I enjoy the challenge that it brings each year. I chose to run for Shooting Star Children’s Hospices because of the support and care they gave for six years to my son Ted, who passed away in March last year,” said Arthur. You can see more about Ted and his Family in Ted’s Story.

“Running has massively helped me over the last 18 months with losing Ted just before lockdown – I was desperate to get out and start training and focusing on getting back to feeling fit mentally and physically. I’d have been lost without running. It gives me a sense of freedom, time to be with my own thoughts and get away from the everyday madness of life,” said Arthur.

“I’ve loved training this time round, which has been different in the summer having to adapt and change the time of running to beat the heat.” Arthur first took on the London Marathon in 2018, again in 2019 and completed it virtually at the end of 2020. “I’m very happy that we are finally able to take part in the marathon this year which has been a long time coming. I think it will be an emotional journey on the 3rd October – a time to reflect on what’s been happening in the world and thinking of the people we’ve lost as we make our way round the 26.2 miles.

Arthur continues, “Being part of Team Shooting Star is always so special – the support is brilliant, and you meet people along the training journey that have their own inspiring stories. Some have become close friends and as we get closer to race day, we’re all encouraging each other to get to the start line with the group chat, especially this year the motivation from people has been awesome.”

Dylan started running in April 2020. “One weekend after I’d just started Uni in September, I saw the ballot was open and since then it’s been in my mind as something I really want to complete, so to be doing it for a charity is an amazing feeling. I get a huge buzz off just thinking about it so who knows what I’ll be like on the day.

“My dad is a Paediatrician at St George’s in Tooting and he’s sent some of the children he’s cared for previously to Shooting Star Children’s Hospices, so it’s a cause close to me and my family’s heart. It provides extra incentive when there is someone so close to you who can see the direct benefit the money raised makes,” said Dylan.

“It’s fair to say running has kept me mentally sane to begin with, as well as helping me stay in shape. As time has moved on, it’s brought structure to my days and the marathon itself has given me something bigger to aim for. Physically, I’m the fittest I’ve ever been and I’m proud to say that, given how easy it would have been to have given up at any stage over the past 18 months. I’ve learnt things about myself and changed as a person in ways that I might not have done had it not been for running. Whilst I haven’t yet had the chance to meet anyone in person in Team Shooting Star, due to work commitments, the group chat has been very supportive, and we all just want the best for each other. I’m buzzing to meet them on the day of the race!” said Dylan.

“I’ve always found running to be a great stress buster,” said Melanie, who works for Shooting Star Children’s Hospices as Head of Volunteer and Retail. “After around 14 years if trying for the ballot place, I finally got one and this coincided with a ‘big’ birthday. I had said ‘never again’ but persuaded myself I had one more marathon in me. Having trained in 2015 during the winter months for the marathon, I found training in the summer has suited me better – the light mornings and long days of daylight has given me many more options of routes to run,” said Melanie.

“It’s great to be part of Team Shooting Star, there is a real feeling of camaraderie on the group chat and we’re all there to support each other even though we’ve mostly never met each other in person – I’m looking forward to getting a team photo before we set off!” said Melanie.

Jamie is taking on this year’s much anticipated marathon in memory of his daughter Margot, who sadly died last year, just seven weeks after she was born. “Throughout this whole experience Shooting Star Children’s Hospices has been an incredible support. From easing Margot’s transition home from the hospital, acting as our voice and spokesperson, organising every possible detail and eventuality of her care and all done with such kindness and compassion. Not to mention, absolutely all for free,” said Jamie.

“The care team take absolutely everything they do in their stride and words don’t really do justice to what incredible care and support they gave to our family and still continue to provide to Jodie and me.

“I’m so unbelievably honoured to be able to run the 2021 London Marathon. The past 18 months have been crazy with lots of ups and downs, and it’s been running that I have turned to and that has restored my positivity about life,” said Jamie.

Jamie concludes, “It’s been great to be part of Team Shooting Star, some of us finally got to meet at a half marathon recently which was brilliant. I’ve learnt more in the two runs I’ve done with the team then the rest of the whole year running on my own, and thankfully because of that I feel ready to take on the marathon. raise some much needed and deserved funds for Shooting Star Children’s Hospices and to run in memory of my beautiful daughter.” Read Margot’s story