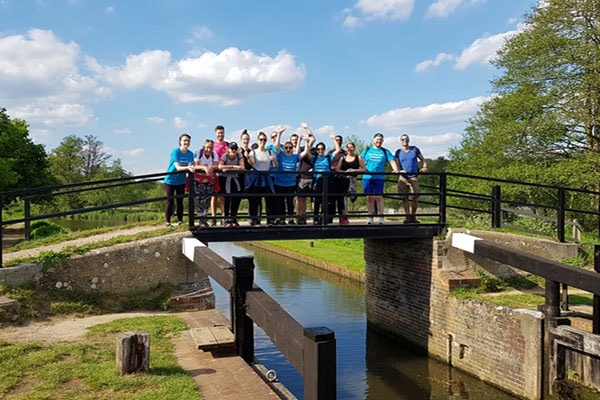 It was a matter of walk this Wey as 16 friends came together to walk 16 miles along the Wey Navigation to raise money for Shooting Star Children’s Hospices.

The walk was latest in a number of special events organised by the family of Rory, who was cared for by Shooting Star Children’s Hospices. Rory’s aunty Rachael Coleman wanted to take on the walk as a personal challenge, whilst raising money in memory of her nephew Rory who sadly died in October 2017.

Rachael said, “When my nephew Rory was staying at Christopher’s, myself and my parents would often walk along the beautiful canal just behind the hospice and it was always relaxing and tranquil. We hoped that one day Rory would be able to join us, but sadly we never managed to make this happen.

“I decided that in memory of Rory I would like to walk from Shooting Star Children’s Hospices Weybridge office to Christopher’s, their Guildford hospice where Rory was cared after, following the Wey Navigation (and stopping at a couple of pubs along the way of course!) I was fortunate to have 15 enthusiastic and lovely friends who wanted to join me on my mission, we had a wonderful day and the weather was very kind to us!”

“It was brilliant how many people we met on our route commented on what a fabulous charity Shooting Star Children’s Hospices is, and we even had some donations from passers by. We were welcomed home by the wonderful staff and children at Christopher’s, which was a very emotional end to the day, and allowed my friends to see the amazing work Shooting Star Children’s Hospices do!

“We raised an amazing £1287! Which once again shows the impact that Rory had on so many people – roll on next year’s walk!”