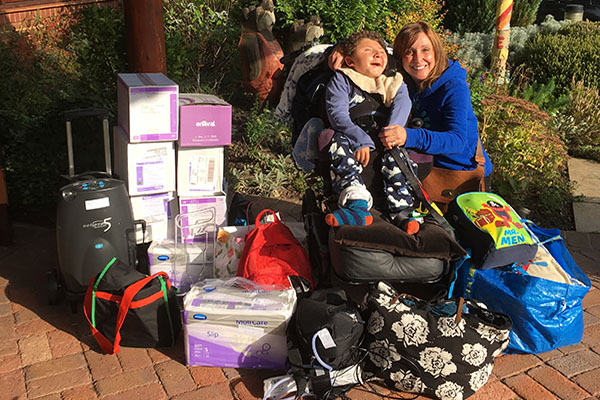 “The minute he gets to the hospice, he’s just so animated, as soon as he’s through the door he’s smiling and knows everyone so well and for me when I get in there, I just feel so free,” says mum Michelle.

Shooting Star Children’s Hospices has been part of 14-year-old Charlie-Ray, and his family’s lives since he was a baby, when he suffered a traumatic brain injury. “His condition means he has no intentional movement, he’s non-verbal, he’s tube fed and he’s unable to regulate his temperatures. It affects everything,” says Michelle. “It was early on that we were referred to Shooting Star Children’s Hospices, which was so helpful, in as much as they were the only people he was left with, besides me and my husband Gerry, we didn’t have a carer – it was so important that we found them.

“There were lots of hospital appointments, and it just seemed things never got any better, they only got very much worse. So, when we were introduced to the Symptom Management Care Team at the hospice, it was at a time when I really felt I couldn’t cope – it was such a shock and I just don’t know where I’d be without them.”

Symptom Management can improve quality of life, and our Symptom Management Care Team are experts in understanding myriad symptoms and working closely with families to help prevent, treat and reduce the burden of symptoms to make the children and young people we support more comfortable.

Michelle explains, “We work a plan out with them when he’s getting bad. Just ringing up and having someone being pragmatic and working it out with us, it means so much. There is nothing worse than seeing your child in pain, and as Charlie-Ray is non-verbal, it’s the fact that they know him, and know exactly what he’s telling us and can treat him accordingly – nobody else could do that. Knowing they are always there, day or night, it’s massive – I don’t know how we would have ever done it without them.”

Charlie-Ray’s health has fluctuated dramatically in the past few years and has twice come to the hospice for end-of-life care. “His first serious episode was in January 2019 and then in February 2020 he was taken very ill and the doctors said it wasn’t really appropriate for him to go into the ICU for ventilation as if he went onto that, it would be very difficult to get him off it. One of the Symptom Management Care Team, Sinead, who is a Clinical Nurse Specialist, came up to the hospital and stayed with us throughout that day, I don’t know where my husband and I would have been without the expert support she gave.

Charlie-Ray was then transferred to the hospice for end-of-life care. “We fully prepared ourselves for the worst. I always think of it like a train crash, you’re on this train and you know it’s going to crash, and you can’t get off. We had braced ourselves and then he got better – it was just amazing. This has happened twice now and both times we were able to be with him at the hospice – and he got better!” says Michelle.

Michelle and Gerry have also received support from our Therapies team, “We’ve had counselling, which has been very helpful, just to know it’s there. It’s been a process helping us except the future,” says Michelle.

Charlie-Ray has also had respite stays at the hospice, “There have been times when physically I’ve been in so much pain, but to have him go to the hospice its peace of mind – I can just rest and build myself up again. Charlie-Ray is a joy to care for, but there is a lot of physical work, and a lot of anxiety and worry,” says Michelle. “He loves it there, the upbeat happy atmosphere, he’s a very sociable boy, loves to be in the thick of things and at the hospice he is. There was a time when he kept having fractures which was very difficult, but the care team were able to look after him and had the specialist equipment so he could travel round the hospice on his bed and be with the other children – where else could that happen?”

“I can’t even begin to imagine what it would be like without Shooting Star Children’s Hospices in our lives. They have just always been there – like a third parent, they’ve been my only constant support. You’re going on this journey, but you’re not alone.”