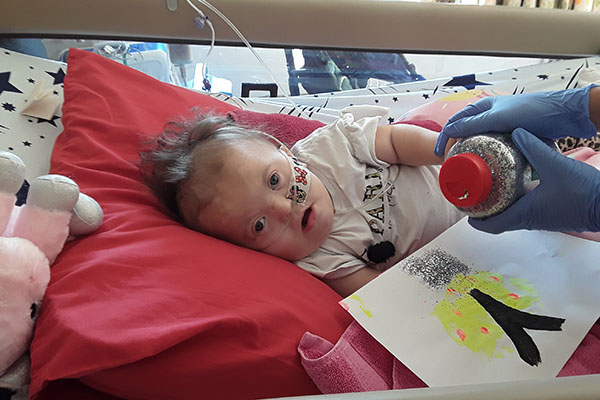 Born premature in August 2017, mum Emma immediately knew all was not right with her youngest daughter Mya.

“She was born at 36 weeks, so early, but unusually she weighed 8lb 6oz due to lots of fluid,” explains Emma. “We ended up staying in NICU for a long time and she went down to 5lb 6oz. When we were finally able to bring her home, within eight days we had to rush her back in an ambulance because she had aspiration pneumonia.”

The family spent a lot of time in and out of hospital after Mya was diagnosed with a rare genetic condition called Pallister-Killian syndrome as well as a myriad of other complex conditions.

“Mya will need 24-hour care for the rest of her life. Before we were referred to Shooting Star Children’s Hospices, I was doing it all by myself – I didn’t even have night carers,” explains Emma. “Mya needs to be on oxygen at home and has a monitor to measure her levels, she also requires physio three or four times a day and sometimes you’re doing that at night-time and that can be difficult when you don’t have any other carers. We really rely massively on the hospice for that help and support.”

3-year-old Mya has been coming to Shooting Star Children’s Hospices since she was six months old. “I was really grateful for the support, it didn’t faze me or worry me at all because I knew that I was going to be able to have the level of support that Mya needed, not only for her, but as a family as well.

“Without Shooting Star Children’s Hospices I wouldn’t be able to do anything with my other children. Their life is restricted enough as it is because of having to be so careful with Mya, but Shooting Star Children’s Hospices gives me an opportunity to spend time with them just being a Mum without having to worry about Mya and I so appreciate that,” says Emma.

“Having the chance for Mya to have respite stays throughout this Covid situation has massively helped – I really don’t know how I would’ve coped. I wouldn’t have slept and really struggled. Just knowing if something was wrong with Mya I could make a phone call to ask advice and have that support has been so good,” says Emma. “And, it’s not only having the support now, but afterwards as well. The support they give to children at end-of-life makes me want to take Mya there if she’s very unwell.”

Sadly, the pandemic has halted all social outings and activity days, which provide a much-needed sense of normality for many families. “I’ve missed being able to go on trips out with other families, like ice skating, which was so lovely, because you feel for that small amount of time that you’re not alone. Having a child with complex conditions can really make you feel alone as there’s lots you can’t do – I explain to people that for me the current pandemic is no different to our normal lives. Being able to meet other families is important as they know what you’re going through – a lot of us have children where you don’t know what the future holds and that’s hard, so being able to talk to other parents in the same situation is really nice.”

Mya previously received care at our Hampton hospice, Shooting Star House. The hospice is temporarily closed due to the pandemic, but we’ve continued to support Mya and many other families virtually as well as at our Guildford hospice, Christopher’s. Emma explains, “They knew parents would probably be a bit hesitant, but the nurses and carers made going to Christopher’s lovely, they really did. It was so nice to see familiar faces and although Mya is visually impaired, she can smell them, she knows who they are, and they know her needs. She’s very loving and loves her cuddles and interaction.”

Mya is deaf and visually impaired, so being tactile is important to enable her to engage in play and activities. “She loves making things and over the last few months she’s painted and created things with clay. She’s been really creative and has absolutely loved getting involved with her hands,” says Emma. “It’s the little things like that, little memories being made, that make such a difference. When Mya’s at Shooting Star Children’s Hospices, I know I can safely leave her because the staff really do provide her with love and support. I feel very lucky.”