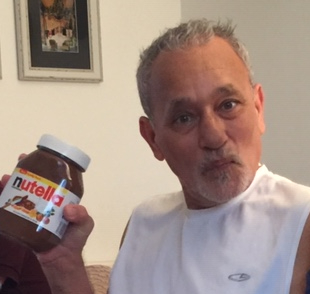 Rob and Kim had only been married for a few months when Rob was diagnosed with bone marrow cancer. As his condition deteriorated, he became more prone to infections, which required hospital treatment and left him confused and disorientated. During one trip to hospital, doctors there suggested he be referred to Phyllis Tuckwell. “Rob overheard them and said, ‘that’s it, I’m going to die’. To him, ‘hospice’ meant the end,” said Kim.

“The doctors suggested that Rob be admitted to Phyllis Tuckwell’s In-Patient Unit (IPU) for symptom management and discharge planning. Rob agreed, but was very frightened. When he arrived there though, he was really surprised. It just wasn’t what he expected. It was amazing. Dr Nick came to meet us and he was so nice. He and Rob really hit it off. Rob was a very complicated patient and his condition was very up and down. He would do well for a while, then get symptoms again, then recover. He told them “I’m determined not to die, I’m not leaving my wife!”

“During our time at the Hospice, the doctors and nurses there got to know Rob so well. They would always pop in and see him, even if they were just going off shift. They looked after me, too. They would make sure I had something to eat, and order me something if I didn’t have anything. They’d even lift the lid off the plate and make sure I actually ate it! Nothing was ever too much trouble; any time of the day or night, they were always there.” Rob once said to Dr Nick ‘how do you expect people to die when you’re so nice to them?’ And they were nice, they were more than nice, they were amazing. I would never have survived without them – they were just so incredible. They treated him as a human being, not just a patient.”

“We spent the Christmas of 2018 at the Hospice. The staff made it as special as they could for us. On Christmas morning they left little bags of goodies for us outside Rob’s room, one for him and one for me, with nice toiletries and chocolates in. Some of them formed a little choir too, and came round one afternoon just before Christmas to sing us all some carols. They came to Rob’s room and asked me what carol I’d like. I chose ‘Little Donkey’ because it reminded me of when my kids were small, and they stood outside his room and sang it for us. It was just so lovely. They held a little Christmas party, as well. I have young grandchildren, who at that time were nine months and two and a half years old. My daughters brought them to the Hospice every day that Christmas, and my eldest granddaughter was so excited because Santa came to the party and gave her a present. She looked so surprised! ‘How did he know I was here?’ she asked! Rob had lost a lot of weight by that time, and was very ill. He didn’t know it was Christmas at all. I really thought he was going to die that day. My eldest granddaughter was too frightened to go into his room because he didn’t look like Grandpa anymore, so I met them in the coffee shop there, and that’s where we had our Christmas Day. My daughters brought the children’s presents with them and we opened them there. Caroline, the IPU manager, came round to see each of the patients and their families too, and gave me a big hug. It was a really sad but very special time.”

Every time Rob got an infection, he managed to get over it, but one morning Kim got a call to say that she needed to come to the Hospice because Rob’s condition had deteriorated badly.

“I knew it was coming. I had stayed awake with Rob all night the night before, as we thought that the end was so close, but he was still with us. I finally went to sleep about midnight, and told Rob to wake me if he needed me. I think I’d probably only

been asleep for about an hour when I woke up, and as soon as I opened my eyes, I knew he had died.”

“I’ve been back a few times since then. You’d think it was the last place you’d want to be, but actually it’s very comforting. I feel that if I walked down the corridor he’d still be there. He used to say ‘if you’ve got to die somewhere, this is a good place to do it,’ and he was right. They become like family. He wasn’t just a patient to them, they got to know him as a person.