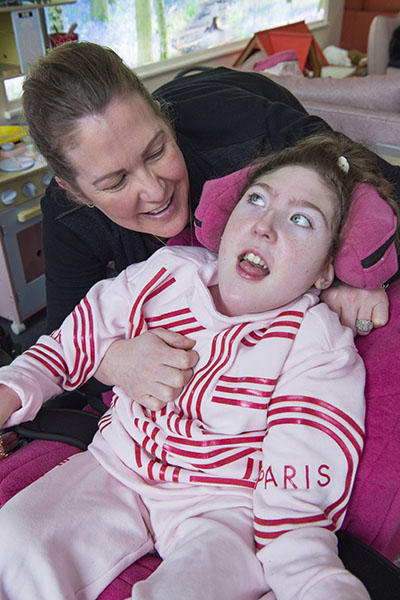 Following a traumatic birth after suffering placental abruption, Marie had to endure every mother’s worst fear as her baby daughter Rosie was whisked away in urgent need of care.

“I’d lost quite a lot of blood due to the abruption and immediately after I’d given birth, Rosie was taken to the Royal London because she wasn’t using one of her lungs,” explains Marie. “They wanted her to have nitro-oxide gas but by the time she’d arrived she’d pulled through and actually didn’t need it, however it all went downhill from there. They told me the majority of her brain was damaged and the only part that wasn’t was the part telling her to breathe.”

Rosie had Spastic Quadriplegic Cerebral Palsy and if this news wasn’t enough of a blow, Marie was told she’d have to be prepared that Rosie may not make it past three months.

“It was so much to take in and believe. She looked just like a normal baby, rolling around and moving, but apparently this was using a baby skills brain that all babies have up to three months,” says Marie. Rosie then started having little jerking movements and following an MRI she was diagnosed with Lennox-Gastaut syndrome, a rare form of epilepsy that varies from child to child and is very difficult to treat. “They kept her in hospital for a month before transferring her to our local hospital for another month. She wasn’t putting on any weight so they gave her a gastrostomy to help her feed. She was so tiny.”

Defying the odds and prognosis, Rosie was eventually allowed to go home and even started school.

“She was doing really well, she’d not had to have any operations or anything and then her leg was broken whilst at school. It was over the six week summer holidays and we were in and out of hospital and that’s when she got pneumonia, pseudomonas, staphylococcal – she got everything. After her leg I think her body went into shut down mode. She couldn’t move, couldn’t do any physio. I have other children – Ronnie, Tilly, Joe and Ellie, and it got to the point where I needed some help.”

Marie had been told about Shooting Star Children’s Hospices when Rosie was first born but had had reservations. “I was like ‘no, I just can’t’, you hear the word hospice and think ‘I don’t want to do that.’” However, following Rosie’s decline, Marie decided to reconsider. “I said to my mum that we’d just go and have a look.”

“From the moment we pulled up it wasn’t at all how I had expected. I said to mum – ‘I wish we had come here sooner’ ”

Rosie and her family have been using the service for around six years. “At first I didn’t like to leave her – me, my mum and the kids would all come and stay with her. Now I drop her off and feel completely at ease because I know she’s being well looked after and it gives me a chance to do everyday things and go out with the children.”

The family often use the hydrotherapy pool together. “She loves swimming, absolutely loves it. She’s usually quite stiff and when she’s in the water she relaxes, you just hold her head in the pool,” says Marie, “My mum can’t swim, but she loves to come with Ronnie and Tilly.”

Recently Rosie’s health has declined. “She’s had to go on a BiPAP machine which helps keep her airways clear at night. She’s on oxygen and cough assist. She breathes predominately through her mouth so she needs a full facial mask to force in the air to keep her lungs open.

I sleep in with her because if she moves, her mask moves and the machine beeps so I have to be in with her to monitor it throughout the night. It’s been a tough few years and the only place that has really helped me is Shooting Star Children’s Hospices.”

“We were recently in hospital for three months and as soon as we came out the team at Christopher’s were in touch to offer me some short break care. I don’t go into a deep sleep when I’m at home because I’m always listening out for machines, so when Rosie’s at the hospice I just have the best sleep. I appreciate it a lot – it gives me that little bit of time to myself and be with my other children, knowing Rosie’s being well looked after.”