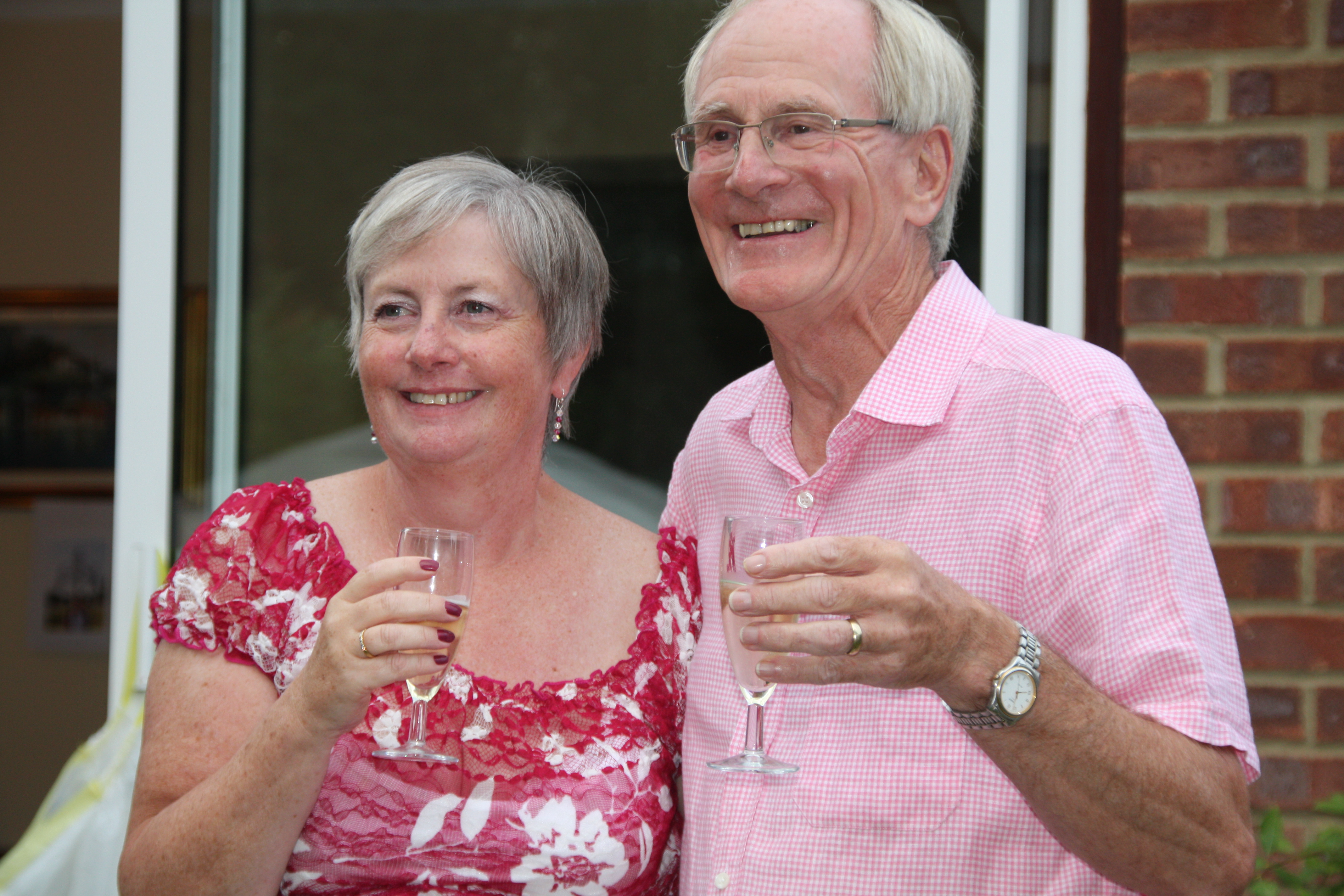 “Once in your life you find someone who is special,” says Mike. “And Yvonne was that. Everybody in the family knew that and she was adored by her grandchildren.” Mike had certainly known it, feeling an instant connection with Yvonne the first time they met. They shared a passion for travelling and during their 23 years together visited many different countries, their favourite being New Zealand.

Having left school with few qualifications, Yvonne decided that she wanted to return to education, and decided to follow an interest which she had in counselling. She embarked on a series of courses which eventually resulted in her qualifying as a counsellor, with a degree from Hull University. She retired from work in 2007, and began volunteering as a counsellor, working for Relate in Aldershot and Cruse Bereavement Care in Basingstoke.

Yvonne’s health problems first became known to the couple in 2011, when she was diagnosed with lung cancer, aged 59. A successful operation removed the tumour, along with part of her lung, and further monitoring of her condition confirmed that she had remained clear. However, as she was getting ready to visit one of her clients in Basingstoke one morning in July 2013, Yvonne commented to Mike that she was getting a little worried about her driving. She described her concerns to him, and he offered to accompany her to the appointment, and wait in the car whilst she saw her client. They set off, with Yvonne at the wheel, but as they reached the T-junction at the end of their road Mike had to reach for the hand break, as Yvonne had failed to stop, or even slow down. Shaken, she and Mike swapped places and he drove her the rest of the way.

When they returned home, Yvonne booked an appointment with her doctor. Yvonne underwent a series of tests, which confirmed that she had a tumour in the stem of her brain. The tumour was preventing messages travelling from her brain to the rest of her body, which was why she had been unable to apply her foot to the car brake when she was driving. She soon began to experience other symptoms too, such as numbness on the left side of her face, confusion, memory loss, and unsteadiness when walking.

Scans showed that Yvonne’s tumour was large, and just six weeks after her diagnosis she underwent surgery to shrink it to a more manageable size. The surgery was successful and meant that Yvonne was able to undergo ‘cyberknife’ radiation treatment, where a laser was used to shrink the tumour even further. She recovered well from both operations and, although weak, slowly began to improve. She was able to celebrate a family Christmas, with Mike cooking Christmas dinner, and in March felt well enough to go on a short holiday to the Peak District, to visit her daughter and grandson. She and Mike walked between two and three miles a day, both very relieved that Yvonne seemed to be on the mend.

Shortly after the holiday, however, Yvonne’s symptoms returned. Doctors confirmed the couple’s fears that the cancer had returned, but this time told Yvonne that it was terminal. Over the next few months it began to increasingly restrict her bodily functions, eventually leaving her unable to hold her body upright. Hospital staff suggested to Yvonne and Mike that they be referred to Phyllis Tuckwell Hospice, and in April 2014 they received the first of what would become many visits, from two of the charity’s staff nurses, Ruth Frankis and Julie Woodall. Ruth and Julie discussed end of life care with Yvonne and Mike, and offered Yvonne a bed in the charity’s In-Patient Unit (IPU). Yvonne declined, however, preferring to remain living at home.

By June Yvonne was bedbound and was being visited regularly by Phyllis Tuckwell’s Hospice Care at Home nurses, who monitored her treatment and medication, and co-ordinated the team of District Nurses and Carers who also came to see her. “I didn’t know that co-ordination was in place,” says Mike. “The whole thing couldn’t have been better organised. I was amazed.” Yvonne’s condition began to deteriorate rapidly and, as her primary carer, Mike began to struggle. Seeing his need for more support, the family and friends rallied round to help care for Yvonne. Phyllis Tuckwell’s Hospice Care at Home nurse Kay Hyatt visited every week, caring for Mike just as much as for Yvonne.

“I said to Kay – ‘you’re coming to see me, you’re always out here in the conservatory with me,’” says Mike, “and she replied ‘you are the carer Mike, you’re my main concern. I need to make sure you’re well enough to look after Yvonne’.”

As Yvonne’s illness progressed, Mike became exhausted, both physically and emotionally. Kay arranged for night nurses to visit Yvonne, and if there were any problems Mike would call Phyllis Tuckwell, where there was always someone available to answer any questions he had, or give advice and support. Yvonne’s illness eventually progressed to the point where she was no longer able to talk, so she started communicating by squeezing Mike’s hand. Mike would ask her a question and if the answer was yes, she would squeeze his hand in response. For the last three weeks of her life, Yvonne was no longer able to support her body weight, and lay paralysed in bed. Mike continued trying to feed her with liquidised food and drinks of water, but she eventually began to refuse them all, not wanting or being able to swallow them. Despairing that she was no longer receiving any nourishment, Mike suggested to Yvonne that she be admitted to IPU. He held her hand and waited for a response – but none came. Yvonne’s answer was not yes. She wanted to stay at home.

Not knowing what to do for the best, Mike contacted Kay, who explained that Yvonne’s refusal of food was part of the end of life process and that he wasn’t doing anything wrong. She was still able to stay at home. Ten days later, Yvonne died, at home – where she had wanted to be. She had been unconscious for the last two days of her life, and died peacefully.

“I couldn’t have managed it without the quiet confidence that the Phyllis Tuckwell staff gave me,” says Mike. “Kay was wonderful, and she visited right up until Yvonne died.”

Over the next six months, Mike slowly started to come to terms with losing Yvonne, and began to recover from the traumatic and exhausting experience he had been through. Realising that he needed some support, he contacted Phyllis Tuckwell, whose care continues into postbereavement and whose support is always there for those who have lost a loved one. Mike arranged to meet with counsellor Martin Fox, but after a few sessions discovered that, after years of helping Yvonne as she studied for her counselling qualifications, he in fact already knew how to manage his feelings and was able to work through his emotions without needing additional support. However, he knows that, should he need us, we are still here for him, if and whenever that may be. Mike has since joined the Fleet Phyllis Tuckwell Support Group to help raise funds for Phyllis Tuckwell.